I, too, rage America

I, Too,
Rage America
By Jeneé Osterheldt, Globe Columnist
May 23, 2021 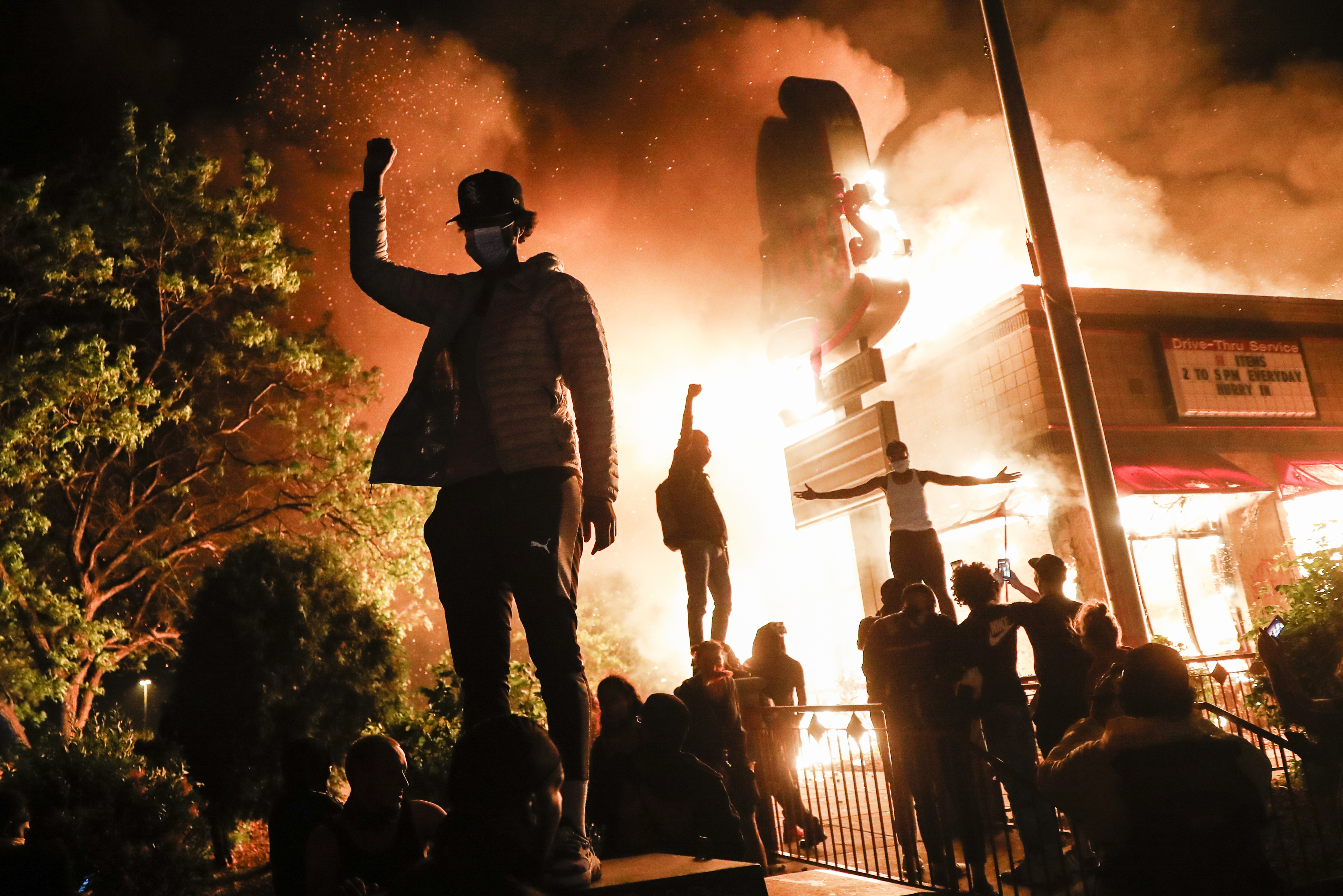 America always meant for our murders to go viral. They used to put lynchings on postcards.

Our elders were tortured, burned, and hanged while hundreds and even thousands of white folk watched, as if Black pain were their favorite melody. They took photos and made souvenirs of our suffering, sometimes with pieces of us attached. America delighted in our deaths.

They murdered us and called it just back then. Now, we chant Black lives matter and big businesses and colleges and even churches post signs on their front doors. They sometimes call our dead martyrs. You cannot kill folk, call it sacrifice, and then party over “progress” on the anniversary of their deaths. Because we’re still dying.

A year ago, George Floyd was murdered. We watched him die millions of times, crying out for his mama as a cop knelt on his neck. We wept and flooded the streets with cries for freedom and justice.

It feels as though America has learned to value us in our deaths instead of doing the liberation work that would lead to our long lives. There were many before him, but we like to think Floyd’s lynching changed the world. In some ways it did, but the bodies keep coming.

I, Too
By Langston Hughes

They send me to eat in the kitchen

Tomorrow, I’ll be at the table

I, too, sing America.

I am the darker brother.

They send me to eat in the kitchen

I’ll be at the table

“Eat in the kitchen,”

They’ll see how beautiful I am

Protesters raised their fists in defiance outside a burning fast-food restaurant near the precinct station of the officers who arrested George Floyd, in Minneapolis, Minn. John Minchillo/Associated Press

“We were never fighting for one man or one verdict,” said Ron Harris, chief resilience officer of Minneapolis. In his role, he centers racial equity, economic inclusion, and environmental justice. “The world’s consciousness elevated a bit. George Floyd’s murder was a flashpoint, but it should have identified all of the other things we experience as Black Americans. If we hadn’t made progress on that, what are we memorializing?”

Violence goes beyond police killings. Violence is being pushed out of your homes or not making enough money to even have one. Violence is a health care system filled with inequities. Violence is an education system that vilifies and erases folk who look like us. Our spirits are T-shirts tagged in graffiti with names of our losses. Lives lived were here.

We cannot catalog the faces and places where we’ve lost all our people. There are candlelight vigils across this country in little communities we under-resource and over-police. And even when the videos play, it’s more likely a court will say the killing was justified. Convictions like Derek Chauvin’s are a rare gasp of accountability, but true justice means not having to fight to live in the first place.

Yes, the verdict brought relief. But it is momentary. Harris said the work continues and we must maintain the urgency. George Floyd, like so many victims of police violence, was also a victim of societal ills. We’re fighting that sickness, too.

“White people were super happy,” Harris said of Chauvin’s conviction for Floyd’s murder. “It felt like they were vindicated in that moment and relieved to move on. George Floyd was not a martyr who died on a cross for our sins. ... We cannot move on.”

We wear our grief in how we change the way we walk and how we talk depending on who is nearby. It stains us in the way we restrain ourselves in debates even when we’re right. It shrinks us in rooms where we deserve to shine. Is this what becomes of a people whose American existence has been spent as victims of their government?

“Black people deserve to have joy and be loved and feel safe and we don’t,” said Biiftuu Ibrahim Adam, co-director of New Leaders Council-Twin Cities, a nonprofit dedicated to training young progressive leaders.

“Mr. Floyd is never coming back,” Ibrahim Adam said. “And in some respects, thank God the world was able to hear the cries and pains of this community. But he is not coming back. And I wonder if we allowed our community to truly grieve the generations and generations of losses that led us to here. We’re still living under the same pain that forced my parents to flee Ethiopia only to see Black people in America sharing that same pain. It’s normalized. Nobody should have to hold this pain.” 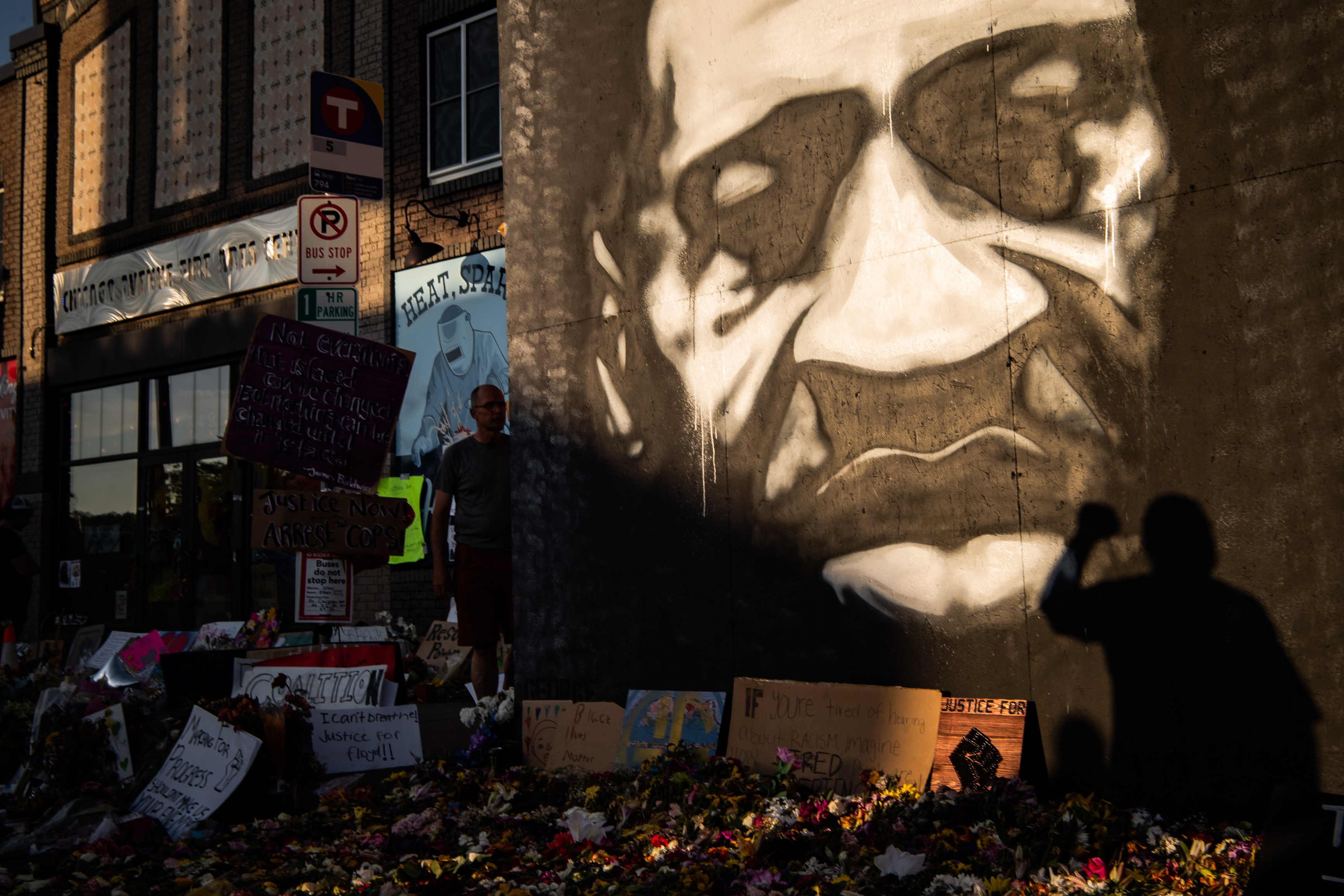 A shadow of a fist-up visitor is seen on a painting of George Floyd at a memorial site at 38th Street and Chicago Avenue in Minneapolis. Salwan Georges

Who might we be if we weren’t always marking someone’s murder anniversary and made to witness the myriad ways this country kills us? Can an open wound be healed?

I was in elementary school when I, like the rest of the world, watched Rodney King brutalized by Los Angeles police. They beat him. More than 50 blows of their batons to his body, a few 50,000-volt Taser shots, and kicks, too. His neck was stepped on. His skull was fractured in 11 places, jaw displaced, bones and teeth broken.

From that March night in 1991 until his death in 2012, he never felt his smile flush the right side of his face. It remained numb.

Two weeks later, that same month in 1991 in Los Angeles, Latasha Harlins was murdered. Her killer, Soon Ja Du, accused her of stealing. The shopkeeper did not care that the 15-year-old was approaching the counter, $2 in her hand and the juice in her backpack. She was a Black girl. 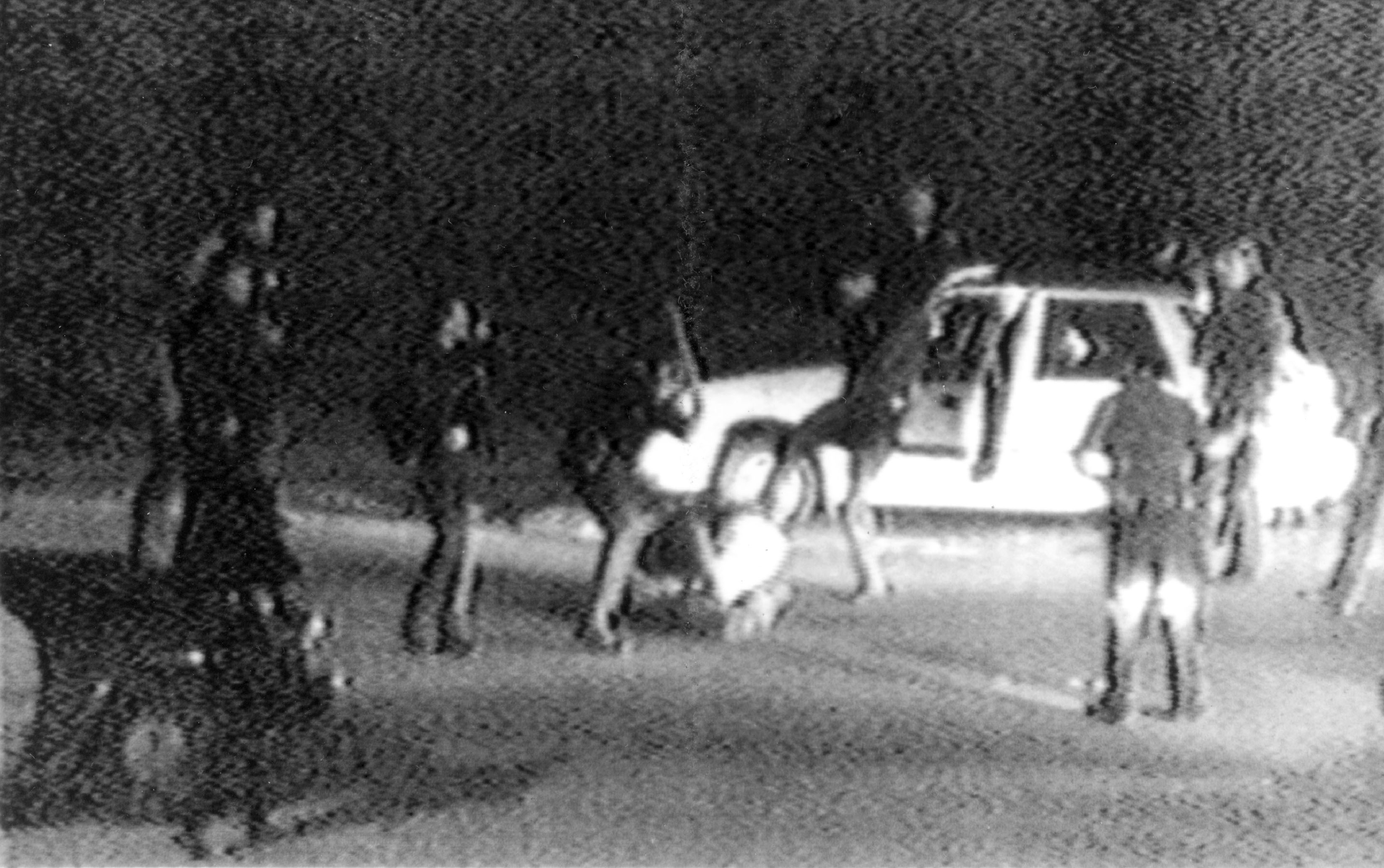 Du snatched her. There was a struggle. Harlins broke free of the grown woman’s grip and put the juice on the counter. She walked toward the door. But Du grabbed a .38-caliber and shot the little Black girl in the back of the head. She was found guilty. But the judge chose to give her 400 hours of community service and a $500 fine. Probation. I was in elementary school when Latasha Harlins was killed.

I was a little Black girl, too.

Or was I? Black folk do not get the luxury of being little or children. And the names of Black girls and women and trans folk melt on our tongues.

The country did not carry Latasha Harlins’s name the way it did Rodney King’s then or the way it does George Floyd’s now. Just as it didn’t for Breonna Taylor. Taylor was murdered in March, two and a half months before Floyd, but we did not say her name until after his death.

There are so many names we do not know, and sometimes I weep for them, too. Because I know somewhere, someone is being brutalized and only their family members will witness. Only they will remember.

Our memories are far too short because it’s easy to run out of spaces to pack and tuck this trauma. We squirrel away our own brutalization, forgetting, erasing, pushing forward. We binge, filling up on names to lift, and then we purge to make room for more. Expanding enough to carry the vast grief of our people seems it would require the breaking of ribs. And we rarely seem to spare one for Black girls, women, and trans folk. 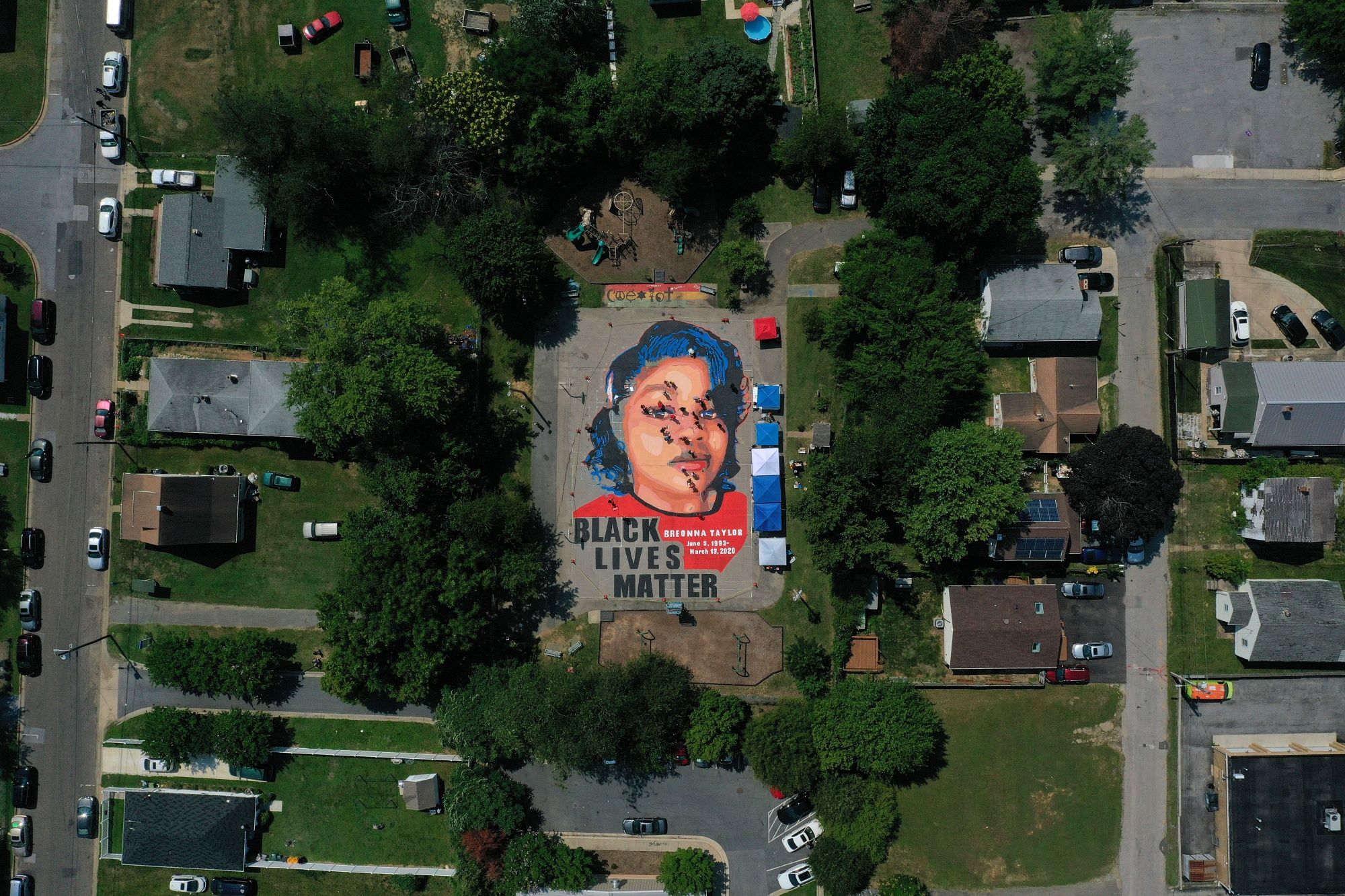 We didn’t remember Latasha the way we should have. Are we going to forget Breonna when corporations are done commodifying her image?

The same day the jury reached a verdict in the Derek Chauvin trial, police killed Ma’Khia Bryant in Ohio. She was 16. But she held a knife, they justified. She was a child in a fight with not one but multiple people and the officer did nothing to deescalate or to stop the chaos and understand the dynamics. No Taser, no humane measures. He shot to kill a child in a split second, the same way police pulled a drive-by on Tamir Rice in seconds, the way an officer in Chicago killed Adam Toledo in seconds. Adam dropped the gun as told. His tiny brown hands were up. And he’s still dead.

“I am a child,” a 9-year-old Black girl in upstate New York told police earlier this year when told she was acting like one. She was having a mental health crisis, running from them, and begging for her daddy. They pepper sprayed her. When they see our young they do not see children. So in a split-second decision, they choose pain. They did not fear Kyle Rittenhouse and his semi-automatic rifle as he walked the streets of Kenosha during the protests last summer even after he’d unloaded it into protesters. They gave the 17-year-old water and gratitude. They saw a patriotic white boy. They let him go home, across state lines, and sleep in his bed.

Meanwhile, in Minnesota during the Chauvin trial, an officer yelled Taser and instead shot her gun at 20-year-old Daunte Wright. He was armed only with a valid fear for his life. He’ll never be old enough to drink. He’ll never see his son again. He’s forever frozen in time and memory. Gone.

And we watched. We tune in to witness the killings of us going viral, a racist infection. W.E.B. Du Bois said the unasked but ever present question of Black folk is, “How does it feel to be a problem?”

America sees not its racism as the issue, but Blackness itself. This is the vision America chose to paint us in: viral pain. And that hurts like hell.

Blackness, America, is not the problem. You will not clothe us in burden and pretend racism isn’t the foundation of the nation and needs dismantling. Death will not become us.

But we must make time to grieve. To mourn. To rest. To see the beauty of being here, now, alive. That is how we will reclaim our image in America, with pride and presence and joy.

It’s been a year since a cop knelt on George Floyd’s neck and we wept and flooded the streets with freedom cries for justice. And we kept on going. Always moving, fighting, resisting, and surviving.

A shadow of a fist-up visitor is seen on a painting of George Floyd at a memorial site at 38th Street and Chicago Avenue in Minneapolis. Salwan Georges